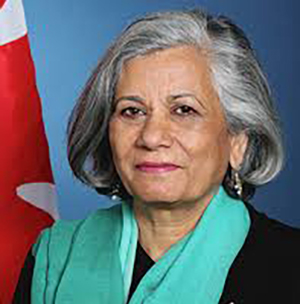 Ratna Omidvar is an internationally recognized voice on migration, diversity and inclusion. In April 2016, she was appointed to the Senate of Canada as an independent Senator representing Ontario. As a member of the Senate’s Independent Senators Group she holds a leadership position as the Scroll Manager and is also the Deputy Chair of the Special Senate Committee on the Charitable Sector.

Senator Omidvar serves as a Councillor on the World Refugee Council and is also a director at the Environics Institute, and Samara Canada and is the Toronto Region Immigrant Employment Council’s Chair Emerita. She was formerly the Co-Chair of the Global Future Council on Migration hosted by the World Economic Forum and the Chair of Lifeline Syria.